6) William Livers Wills (1776/9 — 1819) was one of the younger children of John Baptist Wills, Sr. and Anne Livers.  In addition to bearing his mother’s family name, he was probably named William for an ancestor on the Wills side. By the will of his grandmother Mary Livers (written 1794), he was to receive “one Negro boy to be delivered to him when he arrives to the age of twenty-one years.”  Based on the sequence of siblings named in that will we could estimate his birth in the range 1776-79.  In 1800, Charles County court documents show that guardians were named for his brothers Charles and Frederick but not for William who was apparently of age then.

We know of William’s children from the 1832 will of his sister Mary H. Wills: “I give and bequeath to my nephew and niece John and Juliana Wills, children of William Wills, one hundred dollars each, to be paid to them at the age of 21 years old or day of marriage.”

Based on these minor children’s names, we can connect him to the William Wills who married Mary Thomas on 27 October 1817 in Feliciana Parish, Louisiana and had two children, John and Juliann, whose births are also attested in the local records.  William died on 10 Sept 1819 in St. Francisville, Feliciana Parish, before the birth of his daughter.

William’s brother Frederick had also moved to Louisiana about the same time, settling with other Maryland Catholics in Grand Coteau (about 70 miles west). But, since William died just a few years after going to Louisiana, and his wife soon remarried, there was probably limited further involvement with Wills relatives other than occasional correspondence with his relatives back in Maryland as a consequence of his sister’s 1832 will. In 1838, the “heirs of William Wills” are listed in the inventory of his brother Joseph Ignatius Wills (presumably in his role as executor of his father or sister’s estate).

William’s wife Mary Thomas (1799-1846) was the daughter of John Calliham Thomas and Mary Holloway of South Carolina.  She was considerably younger than William and, soon after William’s death, she married John Huston Brown with whom she had several more children.  The Brown Bible, copied by Miss Grace Cook, Baton Rouge, La., includes the births of the two Wills children.

John F. Wills was born 18 January 1819 in St. Francisville, La.  He married Eliza Catherine Glover (Nov. 1826-after 1900) on 28 November 1843 in her native Wilkinson Co, Mississippi.  They then lived in East Feliciana Parish where the 1850 census records him as a “laborer” without real estate.

No record of this family has been found in the 1860 census, but in 1870 John’s widow was living in Jackson, La. with the two youngest children. In 1880, she and her daughter Louisiana were living with the family of her daughter Julia B. Crane in Clinton. In 1900, she was still living in the household of her daughter, at that time the widow J. B. Kelley.

In Nov. 1866 in New Orleans, she married Thomas H. Handy (born 1838 in Maryland-died c.1890), 2nd Lt. in the La. Artillery, C.S.A. After the war, he became a sheriff in New Orleans and proprietor of the Sazerac bar and was responsible for the final recipe of the Sazerac cocktail. He is buried in Metairie Cemetery. They had 4 children.

Apparently, he was apprenticed as a boy to W. Brister, a butcher in East Feliciana (in whose household W. Wills aged 13 appears in the 1860 census). He served in the 3rd Louisiana Cav. Co. I, CSA.  He married Hallie Elizabeth Johnson (1856-7/2/1936) and in 1880 he was working as a butcher in Jackson. At the 1900 federal census, he was living in Pointe Coupee, La. and reported he was born in Feb. 1847 and married in 1879. After his death, his widow lived with her children. He and his wife are buried in Grace Episcopal Cemetery in St. Francisville, La. where his tombstone gives his birth as “1846”. 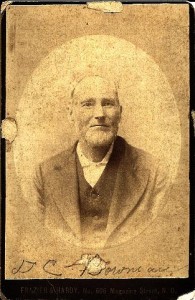 Julia Ann Wills was born 1 April 1820 (after her father’s death) in St. Francisville, Louisiana. In 1837, she married Calvin Dorris Bowman, Sr (1814/16-1888). Family tradition has it that he met Julia Ann at a Methodist camp meeting at Clinton La. and married her that same year. He was a carpenter and sawmill worker. In the censuses, he reported that he was born in Kentucky.

Julia Ann Wills Bowman died 6 March 1872 in French Settlement, Livingston Parish, Louisiana and is buried there. Although he was almost 60, her husband remarried twice, to Rachel Davidson and Marie Eugenie Cornet, with offspring by each.

The first eight children of Julia Ann (Wills) Bowman were born in Clinton, East Feliciana Parish, then two in Amite, Tangipahoa Parish, then the youngest in Bayou Barbary, Livingston Parish.   The children stayed in Louisiana and Texas. A fuller list of descendants can be found in an article published in the French Settlement Historical Register in 1977 and in an online genealogy.