The Wills family of Cobb Neck: Joseph Ignatius Wills (c. 1770-1836) was the oldest son of John B. Wills, Sr. In the 1800s, he settled his family in the southernmost part of Charles County on the peninsula known as Cobb Neck, where they were active supporters of the Confederacy. They frequently intermarried with other Wills relatives, and the only lines with numerous descendants today are those of Richard Edelen Wills (1873 -1937) and Mary Emily Wills Lloyd (1813-1863).

Joseph Ignatius Wills was the oldest son of John B. Wills, Sr. and Anne Livers. The birth order of his siblings suggests he was born around 1770, and a later census suggests it might even have been earlier.  He was possibly named after his father’s friend, Ignatius Semmes (1730-1764) but it could also have been a family name.

The 1790 Census for Charles County, MD lists an Ignatius J. Wills with a household of two free white women, and five enslaved persons. Possibly, one of the free women is a first wife, who then died sometime in the subsequent decade.  The younger age of his surviving spouse Anastasia (b. 1784) and the fact that their first surviving child was born in 1811 (when he was about 40) also suggests that a first wife (and children?) had died earlier.  In 1798, “Joseph Ignatius Wills” was one of the sureties for his sister Ann Prudence (Wills) Smith in her administration of her late husband James Thompson.

We hear of him in three family testaments:

1794: His grandmother Mary Livers’ will names him as Joseph Ignatius Wills.  He was then of age and received one negro man “one feather bed and furniture and to have his second choice and one cow and calf”.

1822:  The will of Lucy Mudd (1822), probably his wife’s aunt, makes bequests to Maria Wills and Lucy Ann Wills, daughters of Joseph I. Wills.

1832: His sister Mary H. Wills’ will: “I give and bequeath all that debt due me from my brother Joseph I. Wills in right of my father in the division of his real estate to the three single daughters of Joseph I. Wills, Maria, Elizabeth and Ann Wills” for their education. 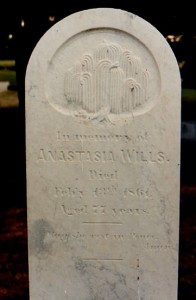 Anastasia Hatcher Wills is buried at St. Joseph’s in Pomfret.

He died in 1836, but his burial place is unknown.  His estate was administered by his son-in-law Zachariah Lloyd.  The 1838 inventory and accounts record payments to the heirs of his brothers William Wills and Frederick Wills.

Summary: He married Dorothy Rosella Hamilton.  He was guardian for his brother Francis in the 1840s.  He died in 1870, leaving his wife and two sons: James A. Wills and John W. Wills, both of whom had served in the Confederate army.

Called “Maria” in the wills of her two aunts.

On 30 May 1830, she married Zachariah Lloyd, a farmer in Allen’s Fresh, and in 1836 he served as administrator of the estate of her father. The 1840 census lists them with 13 enslaved and 2 free negroes. In the 1860 census, shortly after his death, the combined assets of the family were valued at the considerable sum of $30,000.

Her mother Anastasia was living with her when the older woman died in 1861. Mary Emily Wills died on August 29, 1863. This family is buried at St. Joseph’s, Pomfret. (For a full account of the descendants of this family, see Lloyds of Southern Maryland, by D.B. Lloyd, pp. 195-214.)  Their children:

She is called “Ann” in the will of her aunt Mary H. Wills (1832):  “I give and bequeath that debt due me from my Brother Joseph I. Wills, in right of my Father, in the division of his real estate to the three single daughters of Joseph I. Wills, Maria, Elizabeth, and Ann Wills. I desire that the said Joseph I. Wills shall not be called upon for the payment of said debt during his life time. The Interest accruing on said debt I desire him to appropriate to the education, support and maintenance of his said three daughters.”  Accordingly, after his death in 1836, in the 3rd Account of his estate, there is a payment of $230 to “Lucy A. Wills on account of a legacy left her by Mary Wills and due from deceased.”

Her marriage to William T. Campbell in the 1840’s can be assumed from the fact that he receives a bequest from Joseph I. Wills, Sr.’s estate in right of his wife Lucy A.  Campbell. The subsequent history of this family is not clear.

Summary: Around 1840, he married Elizabeth H. Norris (1824-1878).  They lived on Cobb Neck close to the property of his brother Alfred Wills.  Of their many children, only two are known to have had offspring: Mary Ann Wills and Harriet Mary Wills (each married other Wills cousins).

Known only from the 1832 will of her aunt Mary Wills.

In the accounting of his father’s estate, the amount of $35 is paid to F. Robey and F. Thompson (his older cousin) “for tuition of Francis Wills for the years 1839 and 1840”. He entered Georgetown College in May 1844); his mother was listed at Mrs. Anastasia Wills, Pleasant Hill, with his brother Wm. Alfred Wills listed as his guardian.

Presumably this is the Francis Wills, who in 1845 is a bondsman in Alexandria, VA for the marriage of John F.S. Higdon and Margaret E. Banque.  His niece Catherine Lloyd and Higdon’s nephew John Stanislaus Higdon would later marry and name a child Francis Wills Higdon.  It is likely that he had become close to the Catholic families who had moved up from Charles County to Alexandria, while he was studying across the river in Georgetown.

Dr. Francis H. Wills resided on the Public Square in Port Tobacco, where he was a doctor (not to be confused with his cousin Dr. Francis Reed Wills of Preference), first by himself and then in 1852 he joined practice with Dr. Robert Digges.  He marr. Mary O. (surname uncertain, but possibly connected to the Lancaster family). The 1850 Census records Francis (24), Mary (20), Philomena (11 mos.), with $1200 of real estate (presumably the town house in Port Tobacco).

They had two children who married Mattingly siblings:

3.6.2) Francis C. Wills (1851-1870s). In 1870, “Frank Wills”, aged 18, was working as a farm laborer on the property of the Brooke brothers near Newport. The records of St. Thomas Manor show that on 1/27/1873 he marr. Eliz. A. Mattingly (with Briscoe Hayden and Catharine Bond as witnesses).  They had at least one child: Francis L. Wills, born 6/27/1874 and baptized two months later with his aunt Philomena Mattingly as his godmother.  Unfortunately, Francis C. Wills died soon afterwards, and the 1880 census recorded the widow Elizabeth A. Wills and her 6-year-old son Francis L. living with her brother.