Born 28 Feb. 1812 in St. Mary’s County, (6.7) Henry Edwin Morton was the youngest child of Samuel Morton and Rebecca Broome.  His father died in 1834 and about that time Henry and his siblings left St. Mary’s and dispersed widely. 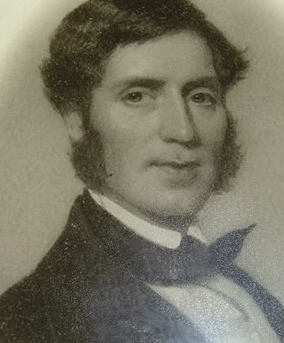 By 1838, he had gone to New Orleans, presumably to join his older brother John H. B. Morton there. He is recorded there in two court cases and the 1840 Census, and is listed as coming from New Orleans on April 23, 1844, when he purchased a tract of land in Izard County, Arkansas from William S. Manning. He also appears on the list of slaveholders in Arkansas. He was also involved with his brothers in some land transactions in Kentucky.

The Daily National Intelligencer announcement of his wedding on Nov. 2, 1847 still describes him as “of New Orleans”. His bride was his young cousin Mary Catherine Morton (1824-1872) who grew up in Charles and Calvert Counties. He must have met her on a trip back home to Maryland and they then lived there in Calvert County.  In the 1850 census there, he is called “Edward”, as he also occasionally appears in other documents.

In 1857, at the death of her father William Morton of Holland Point (Hallowing Point), Henry’s wife Mary Catherine inherited a substantial amount.  Her sister Margaret and Rachel sold their Holland Point inheritance to Mary Catherine and Henry Edwin, so that now they owned the property overlooking the Patuxent in full.  Henry also purchased several parcels on the north side of Stokely (Stoakley) swamp. The 1860 census valued Henry’s real estate at $25,000 and his personal estate at $25,000 (mostly the 35 slaves he had).

At this time, Henry also became quite active in the financial field. In 1857, he loaned John H. Sothoron about $10,000 and then took back a mortgage on “The Plains”. In 1858, Henry was one of the founders of the Mutual Fire Insurance Company in Calvert County, Maryland, which continues operations today. On 8 Dec. 1863, Henry E. Morton conveyed to William I. Bowen 205 acres in Charles County (part of Rattlesnake Ridge, Mary’s Green, Chance, and part of Letchworth).  After the war, he still had money, since in 1867 Judge Magruder mortgaged the land of a hotel in Prince Frederick to Henry E. Morton. Stokely in 1903 at the end of the Morton era

In 1871, Henry E. Morton and his wife Mary C. Morton sold all the Charles County land she had inherited from her father William Morton, which had been passed down from her grandfather Joseph Morton:  altogether about 500 acres of  the parcels Canterbury, Maidstone, Two Brothers, Morton’s Choice, part of New Brandford, part of Foxes Race & “all other parcels bounded on north and east by heirs of James Morton and contiguous to the public road from Hughesville to the burnt store.”

In his will, written 12 Dec 1876, he left “Holland Point” to his son William E. and the farm “Stokely” to his daughter Mary C. Morton, where she lived for the next twenty years until she and William sold it. William also received two lots in Baltimore City: one he kept for himself and one he allowed his cousin Elizabeth M. Gale to reside in (as his father requested, provided Elizabeth paid rent).

He travelled to Cuba with his son in 1878, perhaps to sell tobacco and wheat from Stokely and Holland Point. When the contested estate of Richard Morton of Alabama (his wife’s uncle) was finally settled in 1879, “Henry E. Morton, Ex. of William Morton, deceased” inherited a sum of money, $500.00. 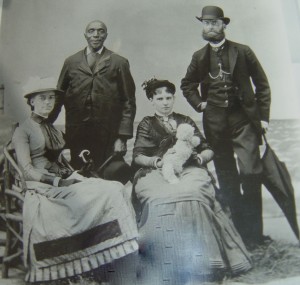 Henry Edwin Morton’s died on 21 July 1881 and was buried at St. Paul’s Church in Prince Frederick (tombstone). His first inventory lists cows, oxen, lambs, horses, sheep, wagons, one grass mower, stocks in B&O RR, two lots in Baltimore, etc.  The “whole amount of inventory” came to $30,782.13. The “final account” of Henry Edwin’s finances by his children the executors stated a balance of $69,226,88.

Note: for a fuller description of the Mortons’ acquisitions and then later sales of Holland Point, Stokely, the Becket farm and other parcels in Calvert County, see Hunting Creek Hundred, by Ailene W. Hutchins (1992).

For some reason, she is not recorded in her parents’ house in the 1850 census. From her father’s will, she received the family silver. By 1900, she had gone to stay with her brother William in Baltimore. She is buried at St. Paul’s (tombstone).

Born 7 Oct 1854, he was named for his father and grandfather.  He inherited Holland Point and the Beckett Farm from his father in 1881 but he quickly began to sell parts of it— in 1883, 460 acres of the southern part of Hallowing Point inherited by Margaret E. Morton were sold to William C. Wood. William traveled to Europe several times (1885, 1886, 1887).

He is buried at St. Paul’s.

Note: the photographs on this page and that of William Morton are courtesy of Karen Morton, who also provided much family information.