The birth of William Morton (1794-1857), the youngest son of Joseph Morton and Catherine Billingsley, is recorded in a family bible on “Anno Domini 1794, 31st August”.

During the War of 1812, he is probably the William Morton who served as a private in the company of the 1st Maryland Regiment of Militia which was raised in Charles County and led by Capt William Thompson. After the war, four of his older brothers and one sister removed to Georgia and then Alabama, leaving two brothers and two sisters in Maryland.  The two brothers, James and William, went into business together and became large owners of land in Charles County, with over 15 transactions in the 1820s alone.

The family bible records that he first married on February 14, 1822 Ann Catherine Turner who was born April 14, 1799 and died young Sept. 1826. They had two children.  A few years later, on December 31, 1829, he wed Catherine McPherson, the daughter of Alexander McPherson and Mary Weems of Aquasco and had two more children.  According to family notes, his second wife was born in September 1798.

By 1830, William Morton moved his family just across the Patuxent River to Calvert County and eventually took up residence at Holland (Hallowing) Point overlooking the Patuxent opposite Benedict. Since there was no bridge across the river until the 20th century, he grew apart from Charles County affairs.  In the 1830 census, besides himself and his new wife, there were three unknown men in their 20s and one free person of color.  In 1840, besides himself and his wife, William’s household still included two unknown men aged 20-29, but now also included one girl 15-19 (Mary Catherine) and two boys under 5 (presumably a mistake for the two little girls).  There were also 22 people enslaved.

The 1850 Census records him aged 56 with $30,000 real estate, his wife and two younger daughters by name. Also in the house was Alexander Burch, a “planter and farmer” aged 40 (thirty years later in his old age he lived with William’s young cousin George A. Morton); a farm overseer, he was close to the Morton family and left them his possessions in his will; perhaps he was one of the men living there in previous censuses.   Living nearby was William’s daughter and son-in-law Henry Edward Morton.

In addition to the properties he had inherited from his father, William was active in buying and selling farms in the central part of Calvert County—an activity that his son-in-law would continue. At his death in 1857, he owned 1247 acres called Hallowing Point. For a full description of the Mortons’ acquisitions and sales of parcels in Calvert County, see Hunting Creek Hundred, by Ailene W. Hutchins (1992).

The family bible states that “William Morton departed this life A.D. 1857, May the 4th” (tombstone, and the church records his burial on May 7th) and that his wife “Catherine McPherson Morton died August 7, 1867, at Aquasco, buried at St. Paul’s churchyard, Prince Frederick, Calvert County, age 69” (her tombstone incorrectly says age 70). Other members of the family are also buried there.

Joseph William was named for his grandfather and father. The Holland Point Bible states “Joseph William Morton” departed this life Sept. 1826. In the family plot of William Morton in St. Paul’s churchyard in Prince Frederick, he is remembered in a sentimental two-sided monument. On the front, it says “To my brother Joseph, born Feb. 23, 1823, Died Sept    1826). On the other side it says “To my Mother, Ann C. Morton, Born April 14, 1799, Died Sept.    1826”.  It seems that both mother and child died together from some disease or accident. The Victorian marker must have been put up many years later when the Mortons moved to Calvert County, using information from the family bible (which accounts for the missing day in the month of their deaths). The phrase “To my Mother” suggests it was put up by Mary Catherine Morton below. 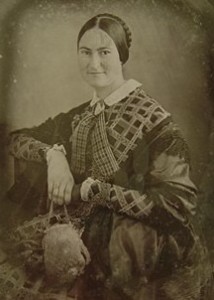 Clearly named for her mother, she was born Oct. 10, 1824 and died Dec 19,1872 (tombstone). After her mother died when she was two years old, she was probably taken care of by maternal relatives for a few years because she is not recorded in her father’s household in 1830 but is there in 1840. She married her cousin Henry E. Morton on Nov. 2nd 1847, and the 1850 census lists “Edward” (aged 36) and Mary Morton (aged 25), living in the Hilltop District of Calvert County not far from her father. Mary Catherine and Henry Edwin Morton had three children: Mary Catherine “Mollie” Morton, William Edwin Morton, John Henry Morton (died infant). For more information, see the entry on her husband Henry Edwin Morton.

“Etheldra” was a McPherson family name.  On July 6th, 1858, at her parents’ home at Hallowing Point, she married Philander Adams Bowen (1826-1919), the son of Rinaldo Johnson Bowen and Jane Adams. They first lived at Woodley Park, north of Georgetown, where their first three children were born. He was the executor of his wife’s cousin George Allen Morton Turner and from that estate bought the 484-acre property called the Aquasco Mill Farm (pdf) west of Woodville/Aquasco, and there they built a large house in 1870 (now known as Maplewood), which stayed in the family until 1927. Rachel A.E. Morton Bowen and her husband sold off some parts of Hallowing Point that she had inherited but some remained in the family at the end of the 20th century.

The children were baptized in various Episcopal churches in Woodville, Georgetown, Baltimore, Prince Frederick.  Most of this family are buried in the churchyard of St. Mary’s in Aquasco or the Bowen lot at Oak Hill Cemetery in Georgetown (pdf).

She is buried with a large monument at St. Paul’s in Prince Frederick, and one of the church windows there is dedicated to her.