James Morton was one of the witnesses to the September 1809 codicil of his great-aunt Jane Waller, so he should be of age by then and born by 1791. But subsequent censuses suggest he was born after 1795 and the 1850 census gives his age as 53, thus born in 1796/7.  It seems most plausible to assume that his aunt thought him old enough to sign the codicil although he was perhaps only 15 or 16.

He lived a few miles east of Stafford Courthouse at Spring Hill, originally a Waller estate that his father had acquired and where his grandmother Ursula Morton lived many years. In his father’s will, he was bequeathed “the Schooner ‘Active’ and all the apparatus to her belonging”. Jerrilynn Eby MacGregor reports that James and his cousin, Withers Waller (1785-1827), operated a ship that carried stone from the Aquia Creek quarries to the city of Washington. He was also engaged in the timber business.

James Morton was a merchant who also had a liquor license in 1833. There is an 1853 lease of John Catesby Edrington to B. Davis and James Morton to fish in Aquia Creek. He appears on the 1855 voting list.

He was a farmer who also served as a justice of the peace from 1835 until 18 April, 1859, when the court records note”being informed of the recent death of James Morton, Esq. for a quarter of a century a justice of this Court”. The court eulogized  that:

“this County has lost an upright Magistrate, Society one of its honored members, and his family a husband father and Master who discharged with exemplary fidelity all the duties imposed by these delicate and responsible relations.”

By 1840 he was married to Lucy Brown Horton (1818/9-1898), da. of Cossum Horton and Lucy Brown. Given the age difference, it is possible that this James Morton had been married previously with offspring, since the 1830 Census in Stafford records him with 3 adult females.  The 1840 census has him (aged 40-49) with a household of 3 adult men, one adult female (presumably Lucy) and one girl less than 5 years old  (and 9 slaves).  His wife’s sister was Mary Ann Horton, the wife of  his cousin John Travers Hedgman.  In fact, the families were friendly enough that the Hedgmans’ son Peter was living with James Morton’s family at the time of both the 1850 and 1860 censuses, and their daughter Mary Catherine Hedgman was also with the Mortons in 1860.

James and his wife Lucy were buried at the Spring Hill cemetery, which now lies under a subdivision house.

On 26 July 1875, she was married to William T. Dix, a clerk aged 36, the son of William W. Dix and Mary J. Bevans, by W.R.D.Moncure. She stated her age then as 30, but the census records indicate she was older.  Her notes about her family history show that there was still a memory that her ancestors had come from Maryland. 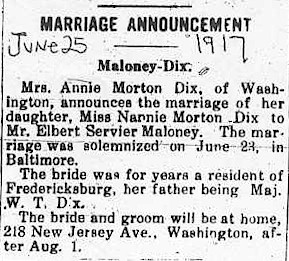 Although not yet married, Charles A. Bryan (aged 21) was living with the Mortons in the 1870 census.  In 1869 Charles became deputy clerk of the court at age 20.  In 1887 he became clerk of the court and remained in that office until 1910. Charles and his wife Margaret operated a boarding house and served meals to people doing business at the courthouse.