She was clearly a competent manager since she is named as co-executor in the 1796 will of her grandmother Mary Livers. Her grandmother thought less well of Anne’s husband, excluding him from any “power to dispose or intermeddle” with her inheritance.  In that same will, she is bequeathed two Negro women, “to be in noways liable to her said husband’s debts, disposal or incombrance.”

Her husband mentioned was her distant cousin James Thompson (d.1795, son of William Thompson), whom she married September 17, 1786 (the Thompson family bible is the source for this and most births, deaths and marriages of this family). Family records state that James served for a four year period in the American Revolution. There is also a record of a transfer of a parcel of land known as “Thompson’s Neglect” from George Thomp­son to James Thompson in 1793. This parcel was included in a survey of Forest Grove made in 1856 for their son Col. Francis Thompson.

James is listed in the Census of 1790 of Charles County with a household of two white males under the age of sixteen, three white females and six enslaved persons. When James Thompson was named as executor for his sister Elizabeth’s estate in 1790, John Baptist Wills was one of his securities. When he died intestate in Charles County in 1795, Ann was the initial administratrix of her husband’s estate (inventories Aug 1795 at £92). By the time of her accounting on Feb. 27, 1797, she was named “Anne Prudence Smith” and her new husband Mathew Smith was co-administrator of the April 1798 accounting.

He was born September 25, 1789.  He was commis­sioned an ensign in Captain John Matthews’ company of Regiment No. 1 of the Maryland Militia in Charles County in 1810.  A successful manager and landowner, he was named as sole executor in the 1832 will of his aunt Mary H. Wills. She gives him “500 dollars for services rendered to me by him in the management of my pecuniary affairs—my nephew William Thompson has a debt of long-standing against my estate which I direct to be paid.”  He had the resources to be an active member of his uncle John B. Wills, Jr’s’ fox hunts.

On Nov. 15, 1842, he married the much younger Mary Grace (probably daughter of Thomas Andrew and Elizabeth Grace Davis), who was probably his second wife.

As early at 1838, he was in business with Basil R. Spalding in Baltimore under the firm name of Thompson & Spalding (correspondence of this firm can be found in the Burroughs papers at Duke University). In 1840, the partnership was listed among the recent stockholders of the Farmers and Planters’ Bank of Baltimore.  In Feb. 1847, that same firm was compensated $524.60 by a resolution of the Md. legislature for damages suffered as agents for farmers “in consequence of there being no room in the State Tobacco Warehouses” the previous year.  In a 1847 court case in St. Mary’s County, we find an example of their finance business: In  1836, William Reeder secured a debt of $2000 owed to William Thompson and Basil Spalding by mortgaging five enslaved persons. Reeder says that he paid various amounts on the debt over the past three years, let them hire and sell one of those enslaved, and sold them another but never obtained receipts or a statement of the remaining debt. At the time of the case, Thompson and Spalding were planning to sell an enslaved woman named Mary. 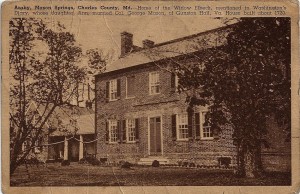 Araby was the home of the Thompson and Wills families for a century.

On 19 June 1849, he bought the historic property which was then associated with the Thompsons and Wills’ for the subsequent century. With the name “Mattawoman”, it had been the family home of George Mason’s wife Anne Eilbeck and the Masons lived there while building Gunston Hall across the river.

Visits there were recorded by George Washington who also lived across the Potomac.  It was from the widow and daughter of George Mason’s son William Mason that William Thompson purchased  “402 acres, 1 rod, and 28 perches of land known as ‘Mason’s Amendment’ for six thousand dollars”.

Thompson changed the name of the property to “Araby”, which continues as its name until the present.  When William Thompson died four years later, he apparently had no children, for he left it to his brother Francis Thompson, who soon gave it to his daughter Anne Thompson Wills.

The Marlboro Gazette of March 2, 1853 reports that “Col. William Thompson, for many years a member of the firm of Thompson & Spalding” died “at his residence (Araby) in Charles county, in the 63rd year of his age” on Feb. 21 and is buried under a handsome obelisk at St. Joseph’s in Pomfret.

In the late 1840s, Col. Francis Thompson was President of the Trustees of Pomfret Church when the new church was built there. Among the 40 other subscribers were Greens, Hamiltons, Jenkings, Mitchells, Pyes, Spaldings, Stones, and Charles Wills, Charles H. Wills, Joseph Wills, and “Mr. Wills”.  He was also a promoter of horse racing during the 1840s.

In 1853, his brother William died and, “he left about fifty thousand dollars worth of property which goes to Col. Frank, he is now a rich man” (1853 letter of John L. Johnson).  This included the Araby estate.  By 1856 his plantation known as Forest Grove was comprised of 563 acres. It seems that not long after that he divided up his property among the three daughters and one son who survived to adulthood. Araby was given (in 1856?) to his daughter Anna, and “Forest Grove” to his son Marcellus.

By the 1860 census, he had retired, and his occupation was listed as “Gentleman” with only $500 in real estate, $1000 in personal property, two older enslaved females.  He was living with Marcellus (“Planter”, $10,000 real estate, $5000 personal, 9 enslaved) and on the next property was his daughter Amelia Stonestreet and her husband Nicholas (“Planter”, $8000 real estate, $26850 personal, 36 enslaved). A Confederate sympathizer, he presided over a meeting in December 1860 censuring those who had supported the candidacy of Lincoln and Hamlin in the presidential elections of that year.

In his will, Francis Thompson writes that he had deeded all his property to his children many years before, reserving to himself a life estate and some stocks for a pension.  After stating, “whereas my affection is equal to all my children, but I believe my son Marcellus Thompson is really more in need than any of the others”, he then bequeaths the remaining stocks and money to Marcellus.”  His children were:

Rather she and Nicholas Stonestreet (c. 1828-1890) were married on Nov. 9, 1859 by his relative Fr. Charles Stonestreet SJ.  Nicholas Stonestreet was a lawyer in Port Tobacco.  In 1874, he sought $2050 compensation from the government for the use and damage to 125 acres of “Shadeland” owned by Amelia D. Stonestreet during the period 1861-64.  The Quartermaster-General reported that Nicholas Stonestreet had not been loyal to the Government and recommended against the claim, but the claim was repeatedly submitted, and finally by their son Charles H. Stonestreet to the Senate in 1910. Their children were Francis X., Charles H., and Mary F.  The family is buried at St. Ignatius, Chapel Point. 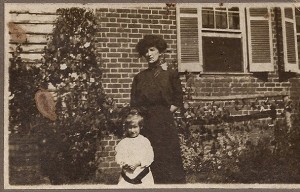 1.3.6) Robert “Bob” Marcellus Thompson (March 21, 1838 —Nov. 15, 1898) m. Mary Josephine Green (Sept. 17, 1840 -Nov. 18, 1911) on May 19, 1863 at Eutaw, then the home of the Dement family. He was Register of Wills for Charles County for a period and was a surveyor and an insurance broker. During the 1890’s the family home “Forest Grove” burned and economic circumstances forced the family to relocate to Baltimore. Six of their children survived their mother: Robert Francis, William Joseph, Anna Josephine (Burch), Mary Elizabeth, Corita Cecilia (Sharrer), Bernard Marcellus.

In a letter dated 7 Jan. 1868, Catherine Johnson Burch gave the family news to her nephew in Alabama, “Your cousin Bob Thompson is married and living at the old place. He married a Miss Green, daughter of Caleb Green and granddaughter of Col. Green whom your poor father knew.  Kit and Mary C. are married also. Kit married a Mr. Stonestreet near Port Tobacco.”

In an 1899 letter to Georgetown College, Charles Hoffman Wills reported: “My uncle Marcellus Thompson left G.T. I think in ’53; he did not graduate from G.T. He went to Emmitsburg and afterwards studied surveying; his whole life however was spent on the estate of his father, “Forest Grove”. He was a member of the sodality at G.T and made his first communion there. I have heard him say that no act of his life gave him more pleasure, nor could he look back to any action with more satisfaction. His career as a Confederate soldier was a short one because he was caught by the Yankees almost as soon as he crossed the Potomac to Virginia, was then taken to Washington and put in the old Capitol, in which place he was confined for several months. He was once elected Register of Wills on the Independent Ticket. He died last November.”

Charles Hoffman Wills also mentioned his “Aunt Kit (Mrs. Amelia Stonestreet)”: “Her husband Capt. Nicholas Stonestreet graduated about 18– at the age of 17. He was, I think, captain of a cavalry company in this county some years ago — thus his title.  He practiced law here for a good many years and figured in politics to some extent. He died some ten or twelve years ago. His half-brother Mr. Harris Stonestreet was at G.T. for four years but graduated at Princeton. His whole life, I think, was spent on his farm. He has been dead four or five years ago.”