The Wills Family > Mortons of the Patuxent > Joseph Morton of Charles Co. > James Morton of Benedict

James’ 1820 census report is interesting not only for its composition —just men, two under 25 and three older — but for their activity. Along with four enslaved persons, three were engaged in agriculture, three in commerce, and two in manufactures.  As a landowner and merchant in Benedict, the first two categories are not surprising, but what were they manufacturing?

James was a merchant but he also had the means to be a land investor, often with his brother William.  From 1823, they are found together as real estate partners on a number of properties in Charles, Calvert, and St. Mary’s Counties, which would have to be unraveled after James’ death.

The marriage was not surprising: the Mortons and Thomases lived in the same general area and knew each other. A generation earlier James’ father had appraised the estate of Maria P. Thomas’ great-uncle Levin Sothoron in 1799 (James’ uncle Samuel was a relation by marriage of the Sothorons and had been one of the witnesses to Levin’s will).

With a name that proclaimed her pedigree, James’ bride was certainly well-connected. Her parents were Caleb Thomas (c. 1755-1813/4) from Charles County and his third wife Priscilla “Prissy” Anderson (1770s-1840s).  She was named for her mother Priscilla and her father’s mother Mary Wilson.  She was variously called “Pricy” or “Pricy Wilson” as a girl, and then on  documents after her marriage: “Maria P. Morton”. His father John Thomas had his family home at “Ware” (near modern Gallant Green), and his uncle William Thomas had built “Deep Falls” (architectural history) near Chaptico.  After the Revolution, Caleb Thomas somehow had the means to assemble a large number of parcels, mostly around “Ware”. He died intestate leaving 22 pieces of land which totaled over 1500 acres.

Maria was one of five children by her father’s last marriage.  All of them were under seven years old when their father died, and so they were raised by their mother Priscilla, the daughter of Jonathan Anderson and Mary Sothoron (of Richard).  Since Maria P. Morton would later own Maxwell’s Seat, it is interesting to note that her grandparents had very briefly owned that property. Her great-uncle John Sothoron had made a contract in 1789 to purchase Maxwell’s Seat but had died the next year before completing the purchase and so his heirs had completed the contract and then immediately sold it.

After his marriage to a wealthy heiress, James Morton had apparently moved to a farm to raise his children. From the viewpoint of the 1830 census, everything had changed in a decade.  His household included himself and his wife and their first three children, and 37 enslaved persons!  Presumably, they were living on the Thomas farms that his mother-in-law “Price Thomas” had at the time of the 1820 census with 41 enslaved. In December 1830, this Priscilla Anderson Thomas acquired the old Thomas Greenfield estate called “Indian Creek with Addition”, at the very north edge of St. Mary’s County and she is found there in the 1840 census.  This property was inherited by Maria P. Morton, and was still in her estate thirty years later when she died, with a mortgage due her nephew Joseph F. Shaw, Jr., which caused the property to be sold at auction in 1878.

After another decade, still more changes: the 1840 census records James Morton with 12 white persons (of whom only 7 or 8 can be considered members of his immediate family), a free black woman with 4 dependents, and 4 enslaved. 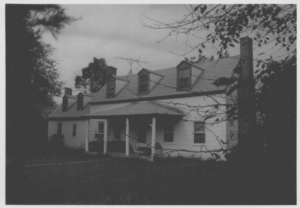 A house in old Patuxent City once owned by James Morton

James Morton died on 20 July 1842 and was buried the next day, according to the records of Trinity Parish, where his family had long been members, but no gravestone for him survives. He died intestate but the court records about the disposal of his substantial property tell us that he left behind six children. His wife was appointed the administrator and published creditor notices and an announcement in October 1843: “the store belonging to the estate of James Morton at Benedict cannot be carried on with the present stock of goods, unsuitable to the season. . . . ”  Presumably this is the store where the real estate of Zachariah Sothoron (husband of James’ cousin Susannah Morton) had been auctioned in 1840:

Trustee sale: decree of the high Court of Chancery of Maryland; sale at Morton’s store in Benedict, Charles Co., Md. on April 1, valuable real estate in said county, near Benedict; being the same estate upon which Zachariah Southoron lived and which John Southoron afterwards sold to his brother Henry Southoron. John Scott, trustee.” (National Intelligencer, 11 March 1840)

The estate included properties in Patuxent City (now just the collection of houses near the intersection by Oldfields Chapel, Hughesville) among them the Patuxent City House, which was sold out of the family in 1860. Maxwell Hall in 1970 before restoration

In 1847, Maria P. Morton acquired Maxwell Hall, overlooking Swanson’s Creek just north of Benedict, and raised her family there for the next twenty years. The historic house (built in the 1760s and now restored) and property are now a county park.

During the 1840s both James Morton and his mother-in-law Pricey Thomas had died, so in the 1850 census we can see a total valuation of the remaining household:  Maria P. Morton had 35 enslaved persons, John Morton (the one son of the family) is listed with $40,000 in real estate and 20 enslaved; Mary Emily with 1 enslaved. How much of this came from his father or mother’s family is not easy to estimate.  Furthermore, there was property in James’ estate still being advertised by his commissioners in 1850. In the 1850s, one of those enslaved by Maria P. Morton was baptized and two were married (to persons enslaved by Mr. Geo. W. Thomas and Mr. B. Robertson) in the Episcopal Church (the records of St. Paul’s Baden).

In the 1860 census, the family’s real estate had doubled, and there was also some increase in personal property (mostly the enslaved persons), divided up among the various family members:

Maria’s increase had come either through investments or more likely inheritance from her mother in the 1840s. The children’s new wealth, however, could be from division of the family property, but some must also be by inheritance from their Morton uncles who had prospered and then died in Alabama.  (Note that the names or ages of the two girls should be reversed.)

After the civil war, the children of James Morton led a protracted and unhappy litigation with their Wood cousins in Alabama over the estate of their common uncle Richard Morton. [Page in progress]

There was also litigation locally, for Maria P. Morton was suing James, Ann, and Elizabeth Adams about their sale of 480 acres of tracts (Port Tobacco Times 10/16/1868).

Maria P. Morton and her son John C. Morton moved to Baltimore sometime after the war, as did her daughter Catherine Adams.  In 1876, both mother and son died in Baltimore (he on May 10th, she on November 9th, “aged 68”). Both bodies were brought home and were buried in the family plot at St. Mary’s Episcopal Church in Aquasco. After that, Morton only survives as a middle name in this family.

Margaret E. Smoot was born not long after her parents’ marriage, either in late 1826 or early 1827, because she was reckoned “of full age” in March 1848 court records for her father’s estate. The National Intelligencer reported that John H. Smoot, of Georgetown, and Margaret E. Morton, daughter of the late James Morton, were married Nov. 20, 1845, at Poplar Grove, Charles Co., Md., by the Rev. Mr. Abercrombie (the Episcopal priest at Trinity Parish, near her home).  Her husband was a distant relative, John Henry Smoot (1819-1891), the son of Dr. Charles Wood Smoot and Harriet Sothoron.  On her mother’s side, he was her second cousin through the Sothorons and, on her father’s side, he was her great-uncle’s step-grandson. He was a prosperous Georgetown merchant with a home on N Street, later known as the old Smoot House,

They had only one child, whose early death was also reported by the newspaper: Mary Elizabeth Smoot (7 Aug 1846 – 27 Feb 1849).  Then Margaret herself died a few months later on 21 July, 1849.  Both mother and daughter were first buried at the Presbyterian Cemetery but were then removed to Oak Hill Cemetery fifty years later.  Her estate (which included the house in Patuxent City and any share of her father’s estate) was then inherited by her husband. J.H. Smoot then married 30 Jan. 1851 Julia Duvall, and they had one child, John Daniel Smoot.

He inherited 250 acres of what was known as the “Dorsey place” (now Serenity Farm).  In 1861 he purchased an additional 250 acres from his mother Maria (the inheritance of Anna Morton Estep who had sold it to her mother in 1858). In 1872, William Turner warned off tresspassers on “my homeplace or the farm known as Dorsey’s, belonging to John C. Morton, rented by me for present year . . . ” (PTTimes 11/22/1872). At John C. Morton’s death, the Dorsey farm was valued at $10,000 for approximately 500 acres.  The inventory credited the estate with 10,000 lbs. of tobacco, 152 barrels of long corn and thirty-four barrels of short corn.  In the house was a trunk, fourteen law books and a gold watch.  The Dorsey farm was inherited by John’s two sisters, Catherine and Susan who promptly sold it for $6000 to their sister Mary Emily Bowling and her husband, who rented it out to tenants.

John C. Morton’s remains were brought back to Woodville/Aquasco, where he was buried two days later in the churchyard of St. Mary’s there. He never married.

According to her tombstone at St. Mary’s in Aquasco, she was born 25 Aug. 1838 and died 23 Jan, 1897.  She was married 6 Nov. 1866 to Dr. George Frederick Adams (1830-1882) at the “Weston” mansion in Upper Marlboro by Rev. Marbury. He was the son of Maj. Benjamin and Sarah Adams of Charlotte Hall.  After finishing the Military Academy there, he studied medicine locally with Dr. Joseph Ford Shaw (his future wife’s uncle) and then received a M.D. at the Univ. of Md. before returning to Charlotte Hall. They moved to Baltimore in the 1870s.

In 1890, Catherine P. Adams had Washington architect William H.H. Kesler design an elegant home and farm complex for her, now known as the Dr. Harry Bowen House, after her cousin who bought it after her death “from paralysis” in 1897.  They had one child who died as an infant: George Frederick Adams, b. Mar 24, 1870, d. Mar 28, 1870.