On 13 Sept. 1871 there was a double marriage: Charles Henry Wills marr. his cousin Francis Anne “Fanny” Burleigh  (daughter of James Burleigh and Frances Martha Cason), the same day that his sister Laura married another cousin James Madison Burleigh. Fanny was born on 18 June 1854.  Charles and Fanny’s farm was next to their siblings and cousins Auguste Burleigh, Joseph Burleigh, and James M. Burleigh (and Laura), and his sister Amanda Devalcourt.

In the 1910 census, living with Charles and Fanny were their boys Marcey (and wife) and Henry and Jules Richard, a widowed boarder.  Charles died 24 Apr 1919 (the death record says he was 72), so with Fanny in the 1920 census were only Henry and daughter Eve. Fanny died on 21 September 1926.

Charles and Francis are buried at Grand Coteau next to his sister Amanda. Their children are the only lines named Wills in St. Landry Parish in the 20th century.

Thanks to James Thaddeus “Rick” Richard for collecting the photos on this page. The “Old Wills Family Home” on Higginbotham Rd, Church Point. It is said to have previously belonged to Edmonia Johnson’s family.

Pres Wills was one of the major players in the sweet potato business in the Church Point, Louisiana area, which was so significant in the tuber business that it was labeled the “Sweet Potato Capital of the World”. He was a grower, packer, and shipper to areas such as Houston and San Antonio, Texas during the 1940’s and 1950’s. He was one of four individuals which owned and operated a major sweet potato kiln to store the potatoes.  However, Prescott was particularly unlucky when he lost one kiln in 1964 and another 1969 due to fires. Children: Clarence (died as a boy when hit by a horse), Mary Sable “Toppy” (Wills) (Bergeron) Calais, twins Norma Bell “Bell” (Wills) Savoy and Norma Dell (Wills) “Tiny” Venable, and Barbara Ann (Wills) Higginbotham. 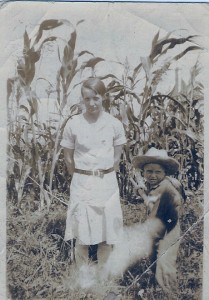 Born 18 Feb. 1884, marr. 8 Jan. 1907 to Lillian Richard (1886-1979, tombstone, obit a member of Oak Grove Baptist Church). Name recorded as “Albert”, “Adelbert”, “Dalbert”, “Adolbert Eugene”.  Raised his family in Sunset, next to his mother and brothers.  According to his obituary in the Clarion-News, he died 11 October 1931 at Sunset “following an accidental shotgun wound in his stomach. It is thought that he was cleaning the gun at the time and didn’t know it was loaded.” His funeral was a Grand Coteau. Children:

Born 15 March 1887, single and living with his parents in 1910 and 1920. In his World War I draft registration, he said he was living in Sunset LA and was supporting his father, mother, and sister. According to his obituary in the Clarion-News, he was still living in Sunset when he died 25 April 1936 of pneumonia after having the flu. His funeral was at Grand Coteau.

The source of his name seems to be Henry “Harry” Toulmin (1766-1823), who was an important legal scholar, Secretary of State of Kentucky, strong advocate of the Louisiana Purchase, judge of the Mississippi Territory, then Alabama legislator.  Alternatively, his grandson Harry Theophilus Toulmin (1838-1916) was a Confederate colonel, Alabama politician and judge (confirmed in January 1887).